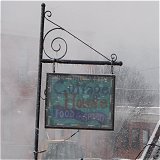 A historic landmark was lost today in Smethport. The Cottage House, built in 1899, burned to the ground in the early morning hours. As yet, no cause for the fire has been offered by the Smethport Fire Department or local police.

The building was not occupied at the time of the blaze. Renters on the upper floor had been given notice a week ago to vacate the building in preparation for a change of ownership that would have reopened the business next spring after extensive renovations and expansion.

The Cottage House blaze at its peak, captured by Smethport resident Mike Neely.

Mick Caulkins of Port Allegany was the owner of record at the time of the fire. He was about to sign a sales contract later in the day with Smethport resident Brian Gustafson who had agreed to buy The Cottage House.

Property adjacent to the restaurant owned by Gustafson was being cleared in anticipation of the sale to make room for expansion. Gustafson is the owner of the Priority One ambulance service and other properties in Smethport. He is also a Borough Council member.

Smethport Mayor Ross Porter said, “The loss of The Cottage House is a tragic and sad body blow to Smethport. We are just stunned. Just Wednesday we learned that it was to receive massive restoration and expansion for a proud, new grand opening this next spring.”

Porter noted that The Cottage House was included in the first ten buildings placed on the Smethport Historic Registry, a local program that began in 2007.

[For more historical information about the Cottage House, click here.]

Fire Marshals from the region will investigate the cause of the fire, which some believe may have occurred under suspicious circumstances. According to Mick Caulkins, The Cottage House was insured for about $280,000, but this may not be enough to rebuild the structure.

Borough leaders had been enthusiastic about the sale of The Cottage House, which had closed down in June. Reopening and improving the building was expected to have a ripple effect in Smethport by attracting more investment to the area.

More news about the fire from The Olean Times-Herald.