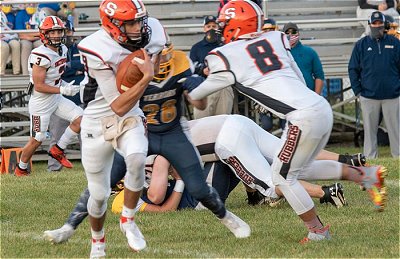 The Smethport football team is off and running… Led by dual-threat quarterback Noah Lent and speedy tailback Braedon Johnson, the Hubbers ran away with a 32-0 first quarter and never looked back in a season-opening victory at Otto-Eldred on Friday. The Hubbers took the final score 60-6 as Lent ran for three touchdowns and threw for three more.

“We’ve got a senior-heavy team, so I expected them to play well,” Smethport coach Adam Jack said. “But certainly they exceeded my expectations tonight. They played really well on both sides of the ball. To come out of the gate like that, put up 32 points in the first quarter, you can’t ask for more than that.”

Lent completed 7-of-13 passes for 196 yard and ran 12 times for 73 yards. Johnson ran for 170 yards on just 13 carries (13.1 per carry) and scored twice, including a highlight-worth 76-yard fourth-quarter scamper in which he dodged multiple defenders in the secondary en route to the endzone. Johnson, Brandon Higley and Richie McDowell had touchdown receptions, the longest being McDowell’s 57-yard score. Read More