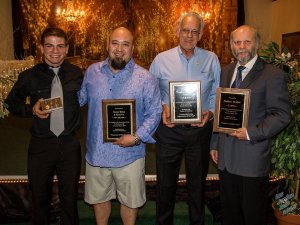 Smethport Web — by Chamber of Commerce

The Smethport Chamber Annual Dinner meeting was held on Wednesday, May 11 at the Court of Angels/Courtyard Restaurant, providing a chance for Chamber members and guests to reflect on the past year while celebrating the community’s accomplishments. The event was officiated by Chamber vice president Megan Simms of Colonial Radio + Entertainment.

The three joined hundreds of other students from around the state who were divided into groups of 20 and participated in simulations in which they had to make executive decisions that would impact various aspects of their business. Adrienne Nannen and Stone Paige spoke about their positive involvement during the intense week of program activities, with Stone describing his experience as the best decision he ever made.

Smethport coach Marshall Shunk introduced senior Jimmy Duffy who was honored for his awesome wrestling accomplishments (36-1) and winning the silver medal in the state championships in Hershey, Pennsylvania. In addition to describing Jimmy’s extensive performance record, Mr. Shunk noted Jimmy’s courage, stamina and self-discipline. The Chamber presented Jimmy with a sealed proof set of American coins as a token of appreciation.

Ross Porter presented the Business of the Year award to Riki Tanaka, owner of The Corner Bistro & Pizza Company on Main Street. In addition to serving good food and offering an extensive menu, Porter noted how the establishment has become a gathering place for the community, a role that was formerly filled by The Cottage House, a historic landmark that burned to the ground in December 2010.

Phil Smith accepted the Community Service Organization award on behalf of the Smethport Rotary Club of which he is president. Nathan Muller was this year’s recipient of the Volunteer of the Year award for his 8 years of service with the Chamber in various Board positions and for voluntarily taking care of both the Borough and Chamber websites.