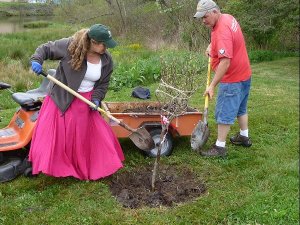 The multi-use Shawmut Trail extends south along Marvin Creek through woods, meadows and farm land to the county’s former poor farm constructed in 1883.

The poor farm is one of the few remaining in the country and the only one that operates an agricultural program designed to meet the rehabilitation needs of County inmates and individuals on probation. The buildings are restored and adapted for administrative use. Even the original bridge that crosses Marvin Creek has been restored. The bridge repair, funded by the Potato Creek Trail Association and several grants, officially opened in April 2016.

The Shawmut Trail was dedicated in 2014 to the late Smethport physician Dr. Douglas E. Bowman, who made the trail a part of his annual “Walk with Doc” event to promote the health benefits associated with hiking and walking.