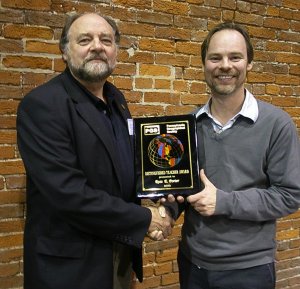 Ross Porter, Smethport, Pennsylvania, received the Distinguished Teacher Award from the Pennsylvania Geographical Society for excellence in teaching as well as innovative and effective classroom methods during his 35 year teaching career.

The award was presented at the PGS during its annual meeting held at York College in York Pennsylvania on November 5th and 6th. Although Ross retired in 2009 he continues to serve as Director of the Planet Smethport Project for the Smethport School District.

Planet Smethport is a virtual historical/geographic website that was developed by Ross and his students during 1998 and has grown to over 2200 geographically connected pages. The project has received numerous awards during its 12 year history.

Ross began his teaching career in 1972 and taught in Smethport from 1981 through 2009. During his tenure he also served as adjunct faculty for California University of Pennsylvania.

At the same event, Ross and Jovanna received the Distinguished Service Award from Glencoe Publishing Company, the education publishing unit of McGraw-Hill. Jovanna retired from teaching earlier this year after 33 years of service in public and private schools. Together, Ross and Jovanna own and operate the Mansion District Inn, an upscale Bed and Breakfast in Smethport.