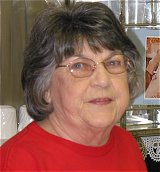 The Smethport Women’s Club has honored Phillis Barnhart with its Woman of the Year award.

Patricia Witchen introduced Phillis as a “believer in our community”. She went on to describe many of Phillis’ activities in Smethport over the years…

She is a member of the Episcopal church where she has been a vestry member and served on various projects. Phillis also formerly worked as a volunteer at Christian Community Services food bank.

As President of the Smethport Garden Club, she has overseen the planting of the beautiful planters on Main Street and the entrance into the park and initiated the home tours that many of us still enjoy.

She is currently active in the Senior Center and with the Elderberries. Phillis worked at getting the vintage soda fountain refurbished at the center by holding fund raisers, such as writing and directing the musical Cabaret that was a big hit. After raising enough money to open the soda fountain she continues to oversee the operation utilizing our teens as volunteers to man it.

I am sure I have missed things that she has used her time and talents to benefit our community. So Phillis, it is with great pleasure the Smethport Women’s club selected you as our Woman of the Year.”

Phillis said she was shocked by the award, but also honored. “And you know, I love doing all that “stuff”!