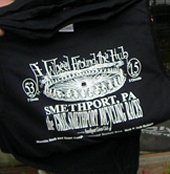 On Friday, September 18th, the day prior to the 2009 Wheel Around the Hub Cycling Race in Smethport, Mayor Ross Porter, Co-Chair of the race, made a casual call to the tee-shirt supplier to confirm plans for the next day. This was a new company for the Lions race committee. The Smethport Lions Club, organizers of the big race, had always hired Studio 4 East in Allegany to create their race shirts.

This year the race committee had decided to use a new heat transfer system for the race shirts that would allow printing to take place the day of the race so only the right amount of shirts would be printed, thereby cutting expenses.

But the phone call was a shocker. The shirts needed the next day had never been ordered by the new company. Nor had they ordered the design heat transfers needed to print the shirts. It would take two weeks to get the supplies. No preparations had been made, despite numerous calls and arrangements. NO T-SHIRTS for the next day’s race!

A pending disaster was at hand with racers arriving from throughout the US and Canada. Souvenir shirts of the race are an intregal part of the race day experience.

In desperation, Porter called Studio 4 East headquarters in Allegany, NY, the previous supplier of the graphic race shirts. Studio 4 East, or the “Fabulous Shirtheads” as they call themselves, had always supplied a shirt printed in remarkable quality; however, because they were printed in advance any excess quantity would put the Lions over budget. 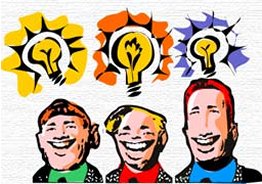 Answering the phone for Studio 4 East was Phil Hardiman. Phil calmly listened to frantic race organizer Porter describe the lack of shirts and impending disaster for the next day’s race. Hardiman checked with owner Peter Wintermantel, Lorrie Wesley and the Fabulous Shirtheads’ design and print teams to see what was possible. Ten minutes later a return call came that they would in fact be able to print the 90 shirts needed by the end of the work day Friday.

The Shirtheads jumped into action, put all other projects aside and began creating the 2009 Wheel Around the Hub shirts for the next day’s race.

By 2 pm Porter received a call from Hardiman that the heavy quality shirts were printed and ready to be picked up.

Thanks to the Shirtheads of Studio 4 East, race day for the Smethport Lions Club was saved. “What goes around, comes around,” noted Porter.