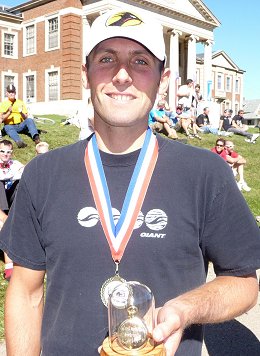 For the second consecutive year, the 53-mile race ended with record-shattering performances in both the Men and Women divisions. The winners of the gleaming Gold Watches were Jay Joslyn and Janel Bedard. Both also received a 1st Place medallion and cash prize.

Riding a Giant bike and sporting number 260 over blue and green colors, Jay’s primary sponsor was Shickluna, a bicycle shop in Buffalo. The shop traces its origin to the 1890s, which was also the start of the Wheel Around the Hub event in Smethport. “The coincidence here rises to the cosmic level,” noted Ross Porter, who co-chairs the annual race hosted by the Smethport Lions Club. “With Jay’s win, our event has finally come full cycle.” 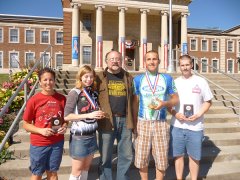 Janel Bedard, age 26, from Morgantown, West Virginia broke the women’s 53-mile record with a time of 2:07:28.0. Janel participated in the race two years ago and used that experience to pull off a stunning record-setting performance this year.

Jill Behm of Erie, Pennsylvania took second place in the women’s 53-mile competition. She set the course record last year with a time of 2:08:37.3. This year she was a bit off stride, recording a time of 2:21:01.7. 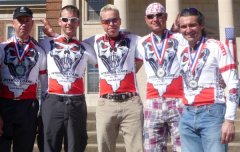 The race was marred by one injury. A cyclist failed to negotiate a 90-degree turn onto Willow Street. Several cyclists went down, but quickly resumed the race. The injured cyclist fractured a collar bone and had to be evacuated from the scene via an ambulance provided by Priority Care.

County Sheriff Deputy Steve Smith served as the Pace Car driver through all seven laps, clearing the way for cyclists as they made their way through traffic. Race Committeeman Jack Pierotti of Chef Specialties accompanied Deputy Smith, providing a second set of eyes to assist keeping the pace car in proper position as well as to spot potential traffic problems along the way.

Organized by the Smethport Lions Club, the primary sponsors of the Wheel Around the Hub race this year were Hamlin Bank and Trust Company, Northwest Savings Bank, and Olean-based Worth W. Smith Hardware. Proceeds from the event go to recycling eyeglasses for distribution to low-income individuals in need.

Courtyard Restaurant and The Hub, occupying a strategic location on Main Street for the event, donated the use of their facilities for parking.

Smethport businesses sponsored the age categories for the event:

Lap Sponsors for the race, two from Bradford, the rest from Smethport, were:

Electronic tracking devices and computerized timing services for the race were provided by The Runner’s High from Grove City, Pennsylvania.