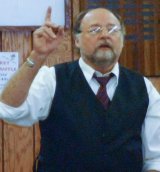 Dinner was prepared under the direction of Rose Campbell. Karen Howard, who recently opened the School of Fine Arts in Smethport, played a selection of pieces on the violin. Ross Porter was the auctioneer and was assisted by guests recruited from the audience. Over 200 items were donated for auction.

The highest bid in the silent auction was $200 for a Kinzua Afternoon Cruise, donated by Ron and Joncine Willis.

Highest bid in the competitive auction was $450 for a bookcase handcrafted by Karl Fitzsimmons. An original “Rt 6” watercolor by juried artist Julie Mader went for $300.

Among the more unusual items put up for auction was a new truck bed cover from the Little Power Shop, which went for $275, and a chainsaw-carved outdoor squirrel bench done by Dave Taylor, which sold for $250.

Among the announcements from the library’s Board of Directors is that the remaining mortgage debt of the new wing will be paid off by the generosity of a recently deceased benefactor.

The library also reported the purchase of a document camera, projector, and window shades for the meeting room – all paid for by a federal grant available under the Library Services and Technology Act.

According to librarian Lori Rounsville, eBooks will be added to the library’s collection in the very near future. To bring attention to this new offering, the library raffled off a Kindle Fire from Amazon. Judy Leasure was the winner of the wireless tablet.

The library’s plans for the next five years include building an outdoor reading area, which will begin soon; insulating the ceiling of the library wing; and purchasing new computers for patrons and staff.

Paving the gravel parking lot at a cost of $51,000 will be done as funds become available.

Postscript: The Hamlin Memorial Library raised $13,000 from its 25th Annual Dinner & Auction. The money will be used for operating expenses.