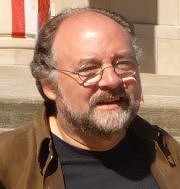 On Wednesday Mayor Ross Porter returned to Smethport by ambulance from UPMC Presbyterian Hospital in Pittsburgh to convalesce at Lakeview Living & Rehabilitation. After 10 to 12 weeks of healing from numerous injuries resulting from a recent truck crash, plus several surgeries to put bones back together, an aggressive rehab regimen can be undertaken to help Porter regain full mobility.

Despite all the pain and discomfort, Porter’s good humor seems fully restored, jovially describing his appearance in medical wraps, pads, and supports as making him look like a “turtle.” He reports that among his first priorities when he arrives at Lakeview is to arrange for an Internet connection so he can get back to work with his MacBook and iTouch.

Porter’s odyssey began two weeks ago when he drove to Lakewood, New York to buy a used John Deere tractor with a heated cab and snow plow attachment. Although Porter doesn’t remember it, on the way back to Smethport his pickup truck crossed into the opposite lane near Augie Road on Route 59 in Keating Township.

His truck hit a culvert and a tree along the berm with such force that the truck bed tool box flew through the rear window, hitting Porter in the head and fracturing a vertebra, before exiting the cab through the windshield. The crash broke 25 other bones, including 15 ribs, and multiple fractures of the pelvis, hip socket, femur, and kneecap.

First on the scene was Smethport High School senior Jessie Isadore who was on his way home to get his football equipment. Jessie has been working with Porter on the Planet Smethport project and, after graduation, wants to study to become a minister. He stayed with Porter until medical help arrived, providing comfort and leading prayer. Jessie related to Porter that he believed he was sent by God to be at that spot at that moment to provide support during that critical time.

Porter agrees… “This could have gone either way. Starting with Jessie and then with the great hospital staff in Bradford and Pittsburgh, many people had a role to play and everyone made the right decisions to get me where I am today.”

Along the way, Porter also credits the Priority Care Ambulance Service with making critical decisions on the scene that may very well have saved his life. When Porter stopped breathing during extrication from his vehicle, the crew resuscitated him and took steps to ensure his air passages remained clear.

From the scene, calls by the ambulance team were made to several medical helicopter services in the area, but none were available. A copter from the Geisinger Medical Center was free in Danville, but would not arrive for another hour. The ambulance team did not want to wait that long, so they took Porter to the emergency room at Bradford Regional Medical Center. Porter’s physician and close friend, Dr. Ferdinand Magno, joined them there.

Also arriving at the accident scene was State Trooper Smith and Rich McDowell and Scott Herzog of the Smethport Fire Department. McDowell handled the tools that cut away the twisted metal, enabling Porter to be freed from the wreckage. Fortunately, Porter wore a seat belt and the truck’s airbag deployed properly, saving him from a serious head injury.

The severity of the injuries required that Porter be flown to a trauma center for surgery. The Priority Care Ambulance team arranged for the helicopter arriving from Danville to transport Porter. Due to weather conditions, it was not decided until take off whether Porter would be flown to Pittsburgh, Erie, or Altoona.

As it turned out, Porter was taken to UPMC Presbyterian Hospital in Pittsburgh, where it was determined that he would need a series of operations as soon as possible. Jovanna Porter joined family and friends in Pittsburgh, driven there by close friend Claudia Caminite.

Teams of specialists mapped out a plan and held frequent meetings to discuss progress. After the spine was stabilized, surgeons took care of the hip socket and femur, which required the insertion of a titanium rod and screws. Bone chips around the kneecap were also removed. In one 9-hour period, Porter had three surgeries and multiple imaging procedures.

Throughout his stay in the trauma ICU Porter was heavily sedated and on a ventilator, breathing through a tube. Later, “nerve blocks” were inserted in his back to ease the pain from his broken ribs, which allowed him to start breathing on his own. With the breathing tube removed, Porter was finally able to talk to his wife Jovanna, as well as son Izach and daughter-in-law Stefi, both of whom live in Pittsburgh.

Throughout his stay Porter has received hundreds of emails, cards, prayer intercessions, and well wishes, of which he an his family are forever grateful.

With these ordeals behind him, Porter is now looking forward to seeing his Smethport friends and family, where he is ready to begin the journey to full recovery, a quest he knows will be challenging, but which he approaches with complete optimism and with the sharp realization that he is truly, “blessed to be alive.”