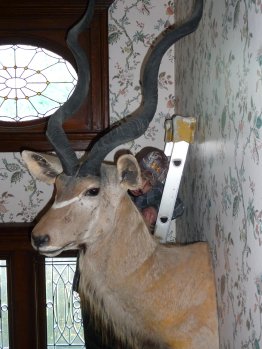 No, not the Bowman Health Clinic… This is a job for Timber Ghost Taxidermy, which makes house calls to restore trophy mounts.

Some trophies are too heavy or mounted too high to be easily taken down and brought to the shop where they can be worked on by experts Sergio Herrera and Bryan Burdick. That was the case recently when Timber Ghost received a call from the Bouton House, where a Greater Kudu was in need of some urgent attention.

The problem was that the mount was too heavy and placed too high to be safely taken down. Weighing in at over 120 pounds and hugging a stairwell wall 20 feet off the ground, the job originally required a scaffold and two people to get the kudu into place, with safety always the overriding concern.

Complicating matters was that the 6-foot head of the kudu was positioned to look left, which made the mount more cumbersome to handle, especially while maneuvering it to hang on a 7-inch spike drilled into the wall. Taking down a beast of this size – and putting it back up – was unthinkable!

Greater kudus are found in the woodlands and bush lands of Kenya, Sudan, Tanzania and Uganda where they are preyed upon by lions, leopards and spotted hyenas. The kudu’s spectacular spiral horns make it one of Africa’s most sought after trophies, which is why the animal is featured at numerous hunting ranches throughout east Africa.

But trophy mounts tend to dry out over the years, causing deterioration around the ears and lips. In addition, the seams of the hide may pull apart. With the kudu at the Bouton House showing all of these signs of deterioration, there was only one call to make.

Sergio Herrera answered the call. Although not accustomed to working in homes, much less as an aerial acrobat, he rose to the challenge.

He brought a repair kit and other supplies and climbed an aluminum ladder, which shook with every step. Due to the animal’s great bulk and its left head-twist, Sergio sometimes had to contort his own body to reach the areas he needed to work on.

The ladder had to be repositioned many times, taking care to avoid glass windows, woodwork, and a Sable mount on the opposite wall. After numerous trips up and down the ladder over a two-day period, Sergio completed the repairs, restoring the kudu to its majestic appearance.