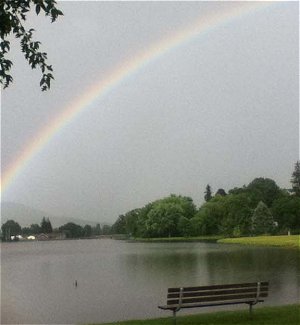 “The light crowd on Friday turned into big crowds on Saturday, until the late afternoon rainstorm, and another big crowd for the fireworks display on Saturday night,” said Jeff Andrulonis, chairman of the Wooly Willy Wonderdaze planning committee.

Andrulonis noted two key indicators of the event’s success: more raffle tickets were sold for the McKean County Fair than ever before and the Smethport Fire Department sold out of chicken barbeque on Saturday.

The fireworks capped a full day of activities on Hamlin Lake, which included a combined bike-car show, an array of “bouncy” rides for the kids, happy vendors, and an exciting karaoke contest that went into extra rounds to determine the first place winner.

A full rainbow over Hamlin Lake following the late afternoon rain was a fitting capstone for the three-day event.

Putting on the annual Wonderdaze festival would not have been possible without the generous support of the following organizations:

Many other people and organizations also worked behind the scenes to help make the Wonderdaze event a success.

The Smethport Fire Department got the long-idle antique engine running properly to shuttle chicken barbeque from the fire house to the park and to participate in the parade.

Smethport Fire Police, Mayor Ross Porter, and Police Chief Ryan Yingling assisted in clearing parked vehicles on Main Street on short notice and in directing the show vehicles off the island to the parade route.

Thanks go out to Smethport schools music director Matt Bailey and the High School marching band, and to Linda Muller for sponsoring a pizza party at the Borough pool for the kids who participated in the parade.

Greg Rounsville, manager of the toy factory in Smethport, hosted a tour at the plant. Earlier in the week, his people ran off 1,000 Wooly Willy toys on short notice. The machines cranked out the toys in 90 minutes and were used as giveaways to children attending the festival.

Finally, special thanks to the whole Andrulonis family – Jeff, Christy, Robert and Kristin – who put in very long hours at the park to ensure everything operated smoothly. They supplied the sound system and operated booths that sold Wooly Willy Wear and other items. Many of the folks at Colonial Radio Group assisted Jeff and Christy.

The leadership of Jeff and Christy also manifested itself in planning the Wonderdaze festival: arranging the corporate sponsorships, placing advertising, ordering merchandise, and hammering out the event schedule. They also attended to the many details that continually surfaced as the festival drew near.

Hats off to everyone who helped make the 3rd Annual National Wooly Willy Wonderdaze a great success!