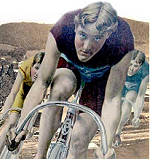 It’s coming again! Smethport’s great 53 Mile 7 Circuit “Wheel Around the Hub Cycling Races” will be held Saturday, September 20, 2008 in the scenic McKean County Seat. The historic race were first held during the 1890s but faded away following the advent of the automobile at the turn of the century. Commencing in front of the McKean County Courthouse on US Route 6 the cyclists today follow the same scenic route as the cyclists of the 1890s. Register Online !

Resurrected again four years ago by the Smethport Lions Club, the 2007 event attracted 105 riders from four countries including Ireland, Switzerland, Canada and northeast & central United States. Much of the entire town get involved. Over 60 citizens serve as corner marshals throughout the 7 mile race course and the Smethport Fire Police and the Smethport Police and county sheriff lend a hand.

Chief corporate sponsor of the event is Worth W. Smith, Inc. Extreme Hardware Stores of Olean, Bradford and Salamanca.

The modern version features the 53 Mile 7 Circuit Classic race and the 15 mile 2 Circuit Fun Race .
Vying for prizes funded by local businesses, participants race to capture the coveted Gold Watches for both men and women. The watches were prizes in races held in Smethport between 1892 and 1899 in the village.