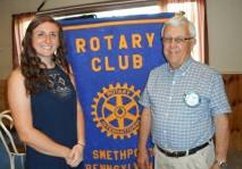 Brooke Kane-Walker, valedictorian of the Smethport Area High School Class of 2016, has received the $1,000 scholarship awarded by the Smethport Rotary Club.

She spoke about her school activities Tuesday at the weekly meeting of the Rotary Club at the Desert Rose Café.

Kane-Walker, who plans to major in biology with a pre-dental track at St. Bonaventure University, has a career goal of becoming an orthodontist. She thanked the Rotarians for the scholarship, saying, “It will really help a lot.”

She has excelled in volleyball and softball. A four-year letter winner in volleyball, she was selected Rookie of the Year and named to the North Tier League’s First and Second All-Star Teams.

Saying she “liked to help people,” Kane-Walker told how she took an active role in organizing the American Red Cross Bloodmobiles at Smethport High and organized a bake sale with the profits benefitting a local family who lost their home in a fire.