Smethport has taken the first step on the road to achieving energy independence. Ross Porter, co-chairman of Smethport Woody Biomass Leadership Team (SWBLT) announced that the Borough has received a commiment of funds from the Community Foundation for the Alleghenies. The grant in the amount of $25,000 will be used for developing a feasibility analysis for the Combined Heat Power (CHP) project planned for Smethport.

The Community Foundation for the Alleghenies, based in Johnstown, supports renewable energy initiatives, primarily throughout the Penelec Service Territory’s twenty-one Pennsylvania counties.

The grant agreement, authorized in late December, specifies that the funds be used for soliciting, placing and producing a feasibility study for the CHP project. With the grant commitment, the SWBLT has issued an 8-page “request for qualifications” that will be used to solicit the services of an experienced technical consultant or engineering firm to prepare the feasibility analysis. 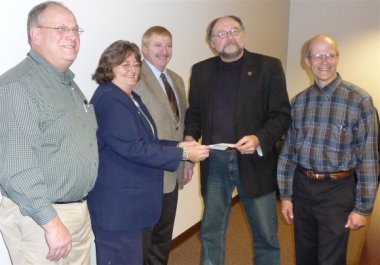 A pre-bid meeting for those interested in performing the analysis will be held on February 16 and selection of the winning bidder will occur in the March-April timeframe. The SWBLT anticipates having the study completed and presented in July.

Among the source materials that will go into the feasibility analysis are the results of the Smethport Heat Survey, which was mailed out to households last month with the utility bill. To date 435 out of the approximately 1,000 households in Smethport have responded to the survey. The data is essential to designing a CHP facility with enough capacity to meet the community’s energy needs. Another mailing is planned to capture data from the remaining 565 households.

The data collection project is being managed by David Taylor, a Smethport High School student, as part of his graduation requirement. David plans to study engineering in college and has already demonstrated his analytical and presentation skills in helping the SWBLT comb through the survey data.

The SWBT has also established the need for a project manager to focus on the various activities of the CHP project and keep them on track. A committee has been created to identify experienced candidates and select a technical person for the position.

On completion of the feasibility analysis, the next step will be to develop a business plan for the CHP project. The business plan is a requirement for additional funding from private, state and federal sources. With state and federal emphasis on WPA-type infrastructure projects to stimulate the economy, the SWBLT’s goal is to become “shovel ready” as soon as possible, according to Ross Porter.

The SWBLT also announced that other grants are being pursued. Ross Porter noted, “We’re at the point — with $25,000 — where we can truly go ahead and start hiring some professional people to help us move this project forward.”