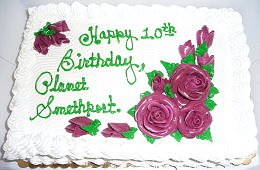 Ten years ago, Ross Porter undertook the formidable task of chronicling the early history of Smethport and surrounding communities as an ongoing project sponsored by the Smethport Area School District. The project was first announced at the fall 1998 Annual Meeting of the McKean County Historical Society.

With the help of numerous students and volunteers, the online archive known as Planet Smethport now boasts an impressive collection of interlinked photos, newspaper accounts, maps, architectural drawings, 3D renderings, and interactive tours that any historical society would be proud to showcase.

Planet Smethport has become known for its geospatial navigation in which arrows embedded into historical photographs point to adjacent streets and buildings, as shown in this photo of the 62-room Grand Central Hotel taken on July 4, 1898.

According to Ross Porter, “Planet Smethport refers the the geographic region of Smethport that has directly been economically or socially connected to Smethport, including the communities of Bradford, Port Allegany, Mt. Jewett. Clermont, Hazel Hurst, Betula, Crosby, the lost towns of Norwich, Keystone, Strait, Instanter, Corydon, Teutonia as well as Bogalusa, Louisiana and many more.”

Smethport students study local history using scans of area historical photos and perform research using a variety of historical sources. “Planet Smethport has evolved into a giant website with over 2,200 interconnected pages with thousands of historic photographs. The project has received digital contributions from all over the world,” Porter said.

“Each page in the site is geographically connected to all other pages so that any page can be reached by ‘traveling’ through the streets or maps of the project from any other page in the site,” Porter explained. He calls the project a “giant, stretchable jigsaw puzzle”. The pieces to the puzzle don’t come in a box. Instead they are hidden in attics, in boxes under beds, or in dustry photo albums. The project features a “Random Tour” link in its masthead, so viewers can explore deep into the project.

The project received a huge boost in 2007 through the efforts of longtime project contributor James Herzog. He funded the optical scanning of nearly the entire historic collection of Smethport newspapers and arranged for the collection to be available for on-line research. Over the years the project has received numerous recognitions and awards including awards from the National Council of Geographic Education at their international conferences in 2001 and 2002.

Over 120 Smethport students and hundreds of Smethport residents and former residents and interested historians from throughout the planet have contributed to the project’s construction.

High school students work on the archive as part of an outside project that is required of all students prior to graduation. Under Ross Porter’s supervision, they scan and caption photos, track down obscure facts, research long forgotten events, take oral histories, and help maintain the website. 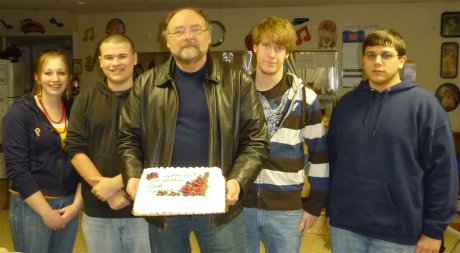 Every month Smethport residents are invited to Planet Smethport “Community Night” at the Senior Center/Visitor’s Center where they can bring old photos, newspaper clippings, and other items to be scanned for possible inclusion in the Planet Smethport website. “The team scans items of interest so everyone can bring home their originals that evening,” Ross explained. “When we encounter fragile items that require extra care, we ask to borrow them so we do not risk damaging them.”

During last week’s Community Night, Corky Hull and Jim Freer became the latest contributors to the Planet Smethport archive. Corky brought in an old family photo album featuring scenes from the early 1900s, including a train wreck and a crane lifting the engine back onto the track. Also shown were storefronts and buildings that have long disappeared from the landscape, plus vehicles of all kinds, including horse-drawn wagons. Especially intriguing was a team photo of an early baseball club, possibly from Smethport.

Jim Freer brought in a folder containing old photos and newspaper clippings. Among the newspaper clips was an interesting account of a 500-pound woman from Coryville who left home to join the circus, prompting Ross Porter to quip: “What job could she possibly get in a circus?”

The history of Smethport and the region is continually being rediscovered. As more facts emerge and are fitted into the “giant, stretchable jigsaw puzzle” generations of students and researchers will have a treasure trove of content to explore, which will enable them to trace their connection to the people, places and events that helped shape their lives.