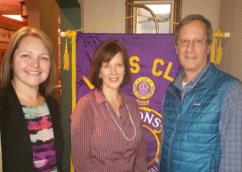 Pamela Burlingame (center) and Claudia Chapman Stein (left) were inducted into Lions Club #5981 at Monday’s bi-monthly meeting of the Smethport Lions Club Chapter. Immediate Past President Jack Pierotti (right) was instrumental in expanding the club’s membership to include women.

The Smethport Lions Club Chapter was established on September 25, 1951, and celebrated its 65th anniversary this year.

Burlingame, a Smethport native, serves her community in both service and fundraising for local organizations. She is member of the Board of Directors for Hamlin Memorial Library and organizes a scholarship supported by “The Class of 1982.” She is an Executive Assistant/Event Coordinator with the Bradford Area Chamber of Commerce.

“After attending a meeting to give a presentation for work last year, I took an interest in the community and service programs this club was providing,” said Burlingame. “I was invited to attend additional meetings and was pleased to be sponsored for membership. This action really was simply about sustaining membership. However, being the first women members is quite an honor.”

Pierotti, who sponsored the two new members, said no Lions Club in the world admitted women until 1987, simply because that was how the organization, chartered in the 1920s, had traditionally operated. Each local Lions Club may choose to remain all men or to also induct women as new members. Many Lions Club organizations also have auxiliary Lioness Clubs, historically consisting of wives of Lions Club members.

Facing dwindling membership, Pierotti said the Smethport Lions had the opportunity to open membership to all to help keep the organization going. The Smethport club – with the admission of Burlingame and Stein – has 13 members.

Stein, a Smethport area native, who recently relocated to Smethport, worked as a budget officer for the Department of Defense Education Agency in the NY/VA School District. She also chose to join after attending a Lions Club event.

“We were invited to attend the Cuba NY Lions Club Annual Dinner over the summer. Since moving back to Smethport after my husband’s retirement from the Navy, I have wanted to become involved in community service. I am impressed with the needs that are met through the fundraising and service of Smethport’s Lions Club.”

The Smethport Lions Club assists disadvantaged adults and children with the purchase of glasses and helps Hamlin Memorial Library in the purchase of large print books. The club also donates to the community food bank, the ELF Fund, the Memorial Recreation Pool, the Leader Dog program, The Western Pennsylvania School for the Blind and Beacon Lodge Blind Camp.

New members are welcome. The club meets at 6:00 pm on the 2nd and 4th Mondays of each month at the Corner Pizza Company in Smethport.