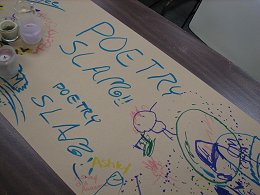 Candles flickered as poets singly or in pairs seized the day to celebrate the power of the spoken word. The budding wordsmiths, sixth graders of the Smethport Area School District, raised the roof of the Hamlin Memorial Library in Smethport, PA with their creativity, passion and zest for life. They slung their verse at an admiring crowd who applauded in the only hip way imaginable: feet stomping, finger snapping, and hand clapping once in unison. It was as if by the magic of poetry that a room in the wilderness of Pennsylvania had metamorphosed into an open microphone night in a Greenwich Village cafe.

Ten minutes prior to show time, poets and their parents congregated on the library steps. Somebody yelled, “I’m psyched!” This elicited a chorus of cheers and laughter. The poets clumped together in groups rehearsing their poems, making last minute revisions on the fly, and otherwise warming up their vocal cords for the poetry slam.

Mrs. Jovanna Porter, their English teacher, had teamed up with the poet Lora Zill of the Pennsylvania Council on the Arts, to cultivate the art of prosody in their apprentice wordsmiths in a ten day intensive boot camp designed to foster self-expression, creativity, and a love of the English language. Wednesday evening’s poetry slam represented the culmination of their efforts. The program itself had been funded by the Pennsylvania Council of the Arts, Arts Erie, and the Smethport Area School District Venture Grant Program.

A response to art was the theme of this evening’s poetry slam. The stage was framed with prints of paintings by Chagall, Picasso, and Van Gogh. Lora Zill, who teaches poetry at Gannon University and Allegheny College, said, “We had twelve year old guys writing about flowers,” explaining how the students found inspiration from Vincent Willem van Gogh’s painting, Irises. Other students found inspiration in Chagall’s I and My Village and Picasso’s The Tragedy.

Poets took turns reciting their favorite poems by Robert Frost, Shel Silverstein and Paul Fleisher as well as some their own original work. Sixth grader Abby Price, found inspiration in Irises for her moving poem, “The white flower stands alone,” that is as much about the solitary white flower in van Gogh’s painting as it a meditation on solitude and sadness. Later, her fellow poet, Whitney Reynolds, read an original piece called, “Tightrope Walker,” in which the speaker describes the mental fortitude necessary to traverse the tightropes of life.

After the word fest, several poets expressed their gratitude for the poetry slam. “It was a really good experience. It was good to let my feelings flow,” said Abby Price. The other poets echoed her sentiments, and hoped that this would be the first of many poetry slams in their future.

The program was the brainchild of Mrs. Jovanna Porter who wrote the proposal that drew grant funding. “All the children have had a wonderful time with this residency and are really proud of their accomplishments. In fact they asked if we could send a copy to President Obama,” said Porter, adding, “I think a lot of the kids were surprised how much fun they had playing with language. Poetry offered them an unexpected freedom with the written word. They wrote some very moving, heartfelt pieces.”

An anthology containing the work of each child has been published and will be given to them during their graduation ceremony on Tuesday, June 2, 2009.