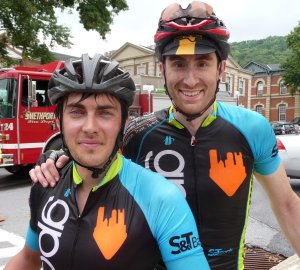 Under an overcast sky with intermittent rain and temperatures in the mid-60s, 81 participants were drawn to this year’s Wheel Around the Hub cycling races, testing their mettle on the 53-mile, 15-mile and 7-mile courses.

While most cyclists seem to have adopted the strategy of staying in the pack most of the way, with the idea of breaking out toward the end of the race, Yundt broke from the pack early and managed to increase his lead throughout the remainder of the race. Heffner stayed with the pack awhile longer, but in the last laps caught up with Yundt. During the sixth lap, a resident on her front porch caught a glimpse of Yundt and Heffner cycling alone on West Main Street and assumed they were in last place!

After the race, Yundt explained his decision to break early: Road water and dirt from cyclists ahead of him were accumulating on his protective eyewear and hampering his vision. The only way to avoid this distraction was to take the lead and stay in the lead. Evidently, Heffner thought this was a good idea as well, as both cyclists far outdistanced their rivals by as much as two minutes during the latter part of the race.

Despite Yundt’s exceptional performance on road conditions that were less than ideal, his winning time did not set a record for the 53-mile event. The course record of 2:05:41.57 still stands, having been set in 2013 by Jeremy Wickham of Corning, New York.

The after-race celebration, including award presentations, was held at the Smethport Fire station where attendees enjoyed smoked beef on a Kaiser roll, baked beans, macaroni salad, and desert for only $9 per person. Musical entertainment was provided by Hamlin Station, a six piece Bluegrass Band from Smethport.

Proceeds from the Wheel Around the Hub amounted to about $4,000, which will benefit the Fire Department.