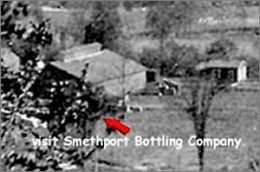 Jim Freer, a long time Planet Smethport community contributor, brought in a high resolution scan from the Donald and Adene Johnson collection of an early 1900s photo taken from the Smethport hillside overlooking the east central portion of the Borough and the Rose Hill Cemetery area. The Johnsons have been frequent photo scan contributors to the Planet Smethport Project. The photographer is unknown, at least for now.

In addition to Nelson Street, the photo also features a bird’s-eye view of the then, newly formed Camp Glass Company factory. The plate glass plant was located in the area of today’s Costa’s Supermarket and the adjoining Emerald Isle.

Camp Glass was built by entrepreneur Thomas Wescot Camp. A New Castle, PA native, Camp began in the glass industry in 1860 at the age of 9. He constructed his plate glass factory on East Water Street in 1900 and marketed products globally. Both the BB& K and the Shawmut railroads offered spurs to the factory.

The new photo has linked arrows to the Camp Glass factory and from there the viewer can enter and explore the factory interior and meet Mr. and Mrs Camp.

Photo scans of a close-up photo of the factory and a separate scan showing its owners, Camp and his wife, Sarah Catherine (Barber), surfaced in 2003 from the Dona Fizzel Cooper photo collection and are accessible by entering the factory in the Planet Smethport project. Dona Fizzel Cooper is also a frequent contributor of scanned images for the project.

Also featured in the new hillside photo is a portion of the Smethport Bottling Plant, later known as the Haines-Flint Bottle Factory and the Bernie Bond Bottle Factory. The bottling facility was located where today’s Costa’s Ace Hardware as well as the District Justice office building stand.

Originally, the bottle factory manufactured all types of bottles for industry with the notable exception of beer bottles. A staunch prohibitionist, the owner refused to produce bottles to be used for beer or alcoholic products. As with all locations in the Planet Smethport site, the bottling factory complex is also linked via the project’s traditional red arrows.

The Camp factory was eventually torn down and the bottle factory was destroyed by fire in 1918. Nelson Street lost its bridge during the 1960s and has since faded in importance as a thoroughfare. A foot bridge was placed at the Nelson Street to (now) German Street crossing by the Smethport Borough in 2007.

Planet Smethport is a community project of Smethport Area School District which began in 1998. The new hillside photo and the entire geographically connected 2200 page Planet Smethport Project are available for exploration at www.smethporthistory.org.