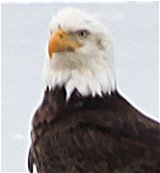 Eagle sightings are becoming more frequent in Smethport, especially around Hamlin Lake. This week a male and female were spotted flying over the lake performing a mating ritual. Later the female landed on the lake bank while the male circled overhead before joining her, according to Amy Pierotti, who witnessed the event.

These amazing photos (click the image) were taken by Paul Costa and Amy Pierotti.

The eagle population is expanding so quickly in this region that it is becoming a challenge to monitor. It is estimated by the Game Commission that there are just over 170 mating pairs statewide, versus only 3 pairs 30 years ago. With reintroduction and growth, this represents one of Pennsylvania’s greatest conservation successes.