The third annual Wooly Willy Wonderdaze festival got underway Thursday evening in Smethport, Pennsylvania with an opening ceremony on the steps of the McKean County Courthouse. The event was hosted by local resident Jeff Andrulonis, president and CEO of Colonial Radio Group. 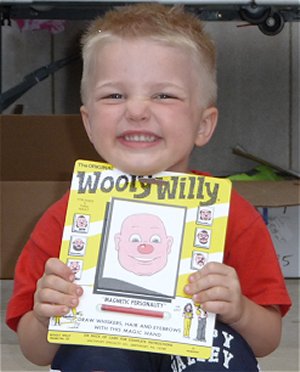 The ceremony featured acclaimed toy inventor Jim Herzog, whose creation, Wooly Willy, is now known worldwide. During the event Herzog graciously modeled a sample from the new line of high quality “Wooly Willy Wear” shirts and caps, which will be on sale during the festival.

Mayor Ross Porter issued a proclamation on behalf of the Borough, noting that Wooly Willy has landed in the hands of children and playful adults around the world during his 56 year career, becoming one of the great, all-time toys, selling in excess of 75 million units in all corners of the globe and honored by the Toy Industry Association’s 2003 “Century of Toys” list. Porter said Wooly Willy’s fame makes him a Global Ambassador.

Dick Powell, Chief Financial Officer of Patch Products in Beloit, Wisconsin was also on hand. He noted that Wooly Willy magnetic toys are still popular and offer a welcome respite from today’s technology gadgets. He sat down on the courthouse steps to play with some children who were given Wooly Willy toys. The toys will be available free to children during the festival.

Kaitlyn Hallock, age 14, from Bradford, sung the National Anthem, which was signed by Kristin Andrulonis from Smethport.

An accomplished singer, actor and dancer, Kaitlyn has already appeared in 12 musicals and cut her first music CD in Nashville, “Dreamer in a Small Town.” She has made numerous television appearances, including a Monday Night Football commercial with Hank Williams Jr. and Gloria Estefan.

After the formalities, attendees enjoyed a Wooly Willy cake prepared at Costa’s Supermarket and beverages supplied by Jackie Taylor, owner of The Country Porch.