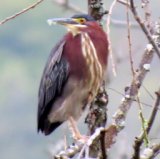 May is a month of surprises for birders of all stripes. The winds bring short term visitors through the area on their way to northern breeding grounds and our local breeders return from thousands of miles away to perpetuate their species.

Saturday, May 11th was the date for the Pennsylvania Migratory Bird Count. On this day birders across the state spent whatever time they had available finding, identifying, and reporting every bird they could in all 67 counties. This is one of many citizen science projects that help scientists monitor the status of birds in the state.

Our local club, the Allegheny Highlands Bird Club, had several members in several counties at work. Part of my day was spent on the Shawmut Trail and at Hamlin Lake, both part of the Potato Creek Trail System.

Not much was on the lake, but the Shawmut Trail was a different story. The club had put up and maintained a bluebird trail here and bluebirds were there. Where there are bluebird boxes there are also swallows. In addition to many tree swallows and barn swallows, nine cliff swallows sat on a wire giving me a good luck at a species I had not seen many times. Two solitary sandpipers were in a shallow pool; a short rest before continuing their long trip to northern Canada.

At the other end of the trail near the Smethport trail head, Belted Kingfisher, Green Heron, and Yellow Warblers along with other common species were singing and abundant. On this day, fishermen and birders took advantage of a valuable community resource. I am looking forward to more birding on other trails in the system.