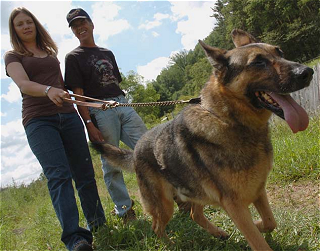 Mike and Jamie Mangan with Rex outside their farm in Smethport. Jamie and Rex were a team in Iraq where Jamie was gravely injured by an IED in 2005. Mike Mangan was the first medic on the scene and saved her life, and they eventually were married.