Smethport Web — Smethport Board of Trade

The Smethport Board of Trade announced today that the Borough of Smethport is the recipient of a $50,000 planning and engineering grant for the Smethport Woody Biomass Demonstration Project from the Richard King Mellon Foundation of Pittsburgh.

Smethport is seeking to be the first community in the nation that is renewable energy self-sufficient. The project seeks to co-generate residential and commercial district heat and electricity using waste wood and low value wood harvested from the region including the Allegheny National Forest. Energy money will be re-circulated within the local economy instead of being shipped out of state. Wood fired district heating systems are widely deployed in many European countries and have generated a track record of reliable, green heat and power.

“The support of the Richard King Mellon Foundation comes at a critical time for the project,” according to Smethport Mayor, Ross Porter. “We will be able to couple these funds with other matching funds to conduct a thorough engineering study.” 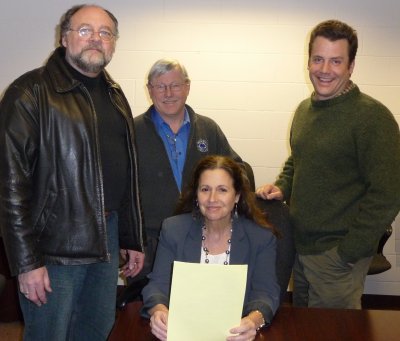 The Richard King Mellon Foundation grant springboards with the $25,000 grant award from the Community Foundation for the Alleghenies. The borough is in the process of hiring a Project Engineer Consultant to oversee the planning phase of the project.

The award from the Richard King Mellon Foundation assists the Smethport Woody Biomass Demonstration Project to reinvent Smethport based on its rich lumber-based economic history coupled with modern, state of the art, renewable energy technology and environmental science.

The Smethport project was born out of a delegation of state and federal officials and educators who journeyed to Austria to evaluate renewable energy opportunities, and specifically, woody biomass to energy. The delegation visited Güssing, Austria, a very intriguing example of a moderately sized rural town heavily invested in renewable energy. Güssing is a model green energy community that generates the majority of its own energy while also serving as a research hub in Europe for a variety of renewable energy projects.

Even while the Austrian trip was still in progress, the Borough of Smethport was identified as uniquely positioned for a combined heat and power (CHP) woody biomass demonstration facility providing sustainable carbon-neutral heat and green electric power.

According to Dr. Tim Pierson an Austrian Delegation member and Penn State University faculty member, “The need to perform the ‘Big Dig’ to replace the water system, plus the unique fact that Smethport operates its own electric power system and has an actively engaged community, are major reasons why Smethport was identified as a prime candidate for a community-scale renewable energy demonstration project.”

Ross Porter noted that Smethport has a history of building its economy with wood:

“It was the lumber industry that ignited Smethport’s economy and drove the economic engine that would create the Smethport Mansion District in the 1880s and 1890s.

As early as 1822 John Applebee created the Hamlin Lake in the center of town and installed a water-powered, sawmill in Smethport. During the 1880s and 1890s giant, steam powered saw mills were located in the borough, sawing millions of board feet of lumber and driving Smethport’s economy.

During the turn of the century in the early 1900s wood chemical plants dotted McKean County and pumped money into the local economy. But these industries exacted a high price on the environment. The forests were denuded and toxic byproducts from the chemical industry polluted the soils. Today in contrast, woody biomass utilized by the heat and power system will be harvested sustainably.”

Smethport is faced with a massive replacement project of its antiquated and failing water line system much of which was installed during the 19th century. An integral requirement of CHP district heat is a delivery system of extensive hot water heat pipes. This provides an opportunity to simultaneously update the municipal water lines while installing district heat infrastructure offsetting the costs of both systems.

Smethport is one of only a few municipalities in the Commonwealth that owns its own electric utility. This unique situation dates back to the inception of borough electric service in 1921.

Leaders of the project are working closely with the Department of Natural Resources, the Pennsylvania State University, and the United States Forest Service, the McKean County Commissioners, Senator Scarnati and Governor Rendell’s offices, and a variety of other state and federal offices.