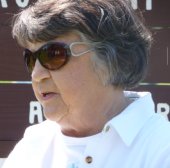 The Garden Club dedicated a new planter at the Water Street entrance to Hamlin Lake Park on Saturday. The planter consists of several courses of stone holding a variety of blooming flowers. Under the welcome sign to the park, a new plaque on eye hooks now replaces the one that had been lost.

Mayor Ross Porter congratulated the Garden Club for all of its accomplishments over the years to beautify the community with flowers, not just in the park but along Main Street.

“This organization has shown vision over many years. It has raised funds, held teas and organized tours of homes to create a wonderful environment for all of us,” Porter said. “It is these kinds of activities, events and people who make a community work.”

Phillis Barnhart noted that the plot started out in 1986 as just a tree and some flowers. Upon arriving on the Garden Club scene years later, she had the notion that the plot should be much bigger.

“So we made it bigger, and it got out of hand,” she said. “The waterway would overflow and wash everything out. We would come down here and get to work on hands and knees. A few years ago, we decided something had to be done.”

The Garden Club thought the problem could be solved using landscape timbers, but not even this was enough to stop the water from washing over the plot. Last year, the Garden Club decided to build a stone planter that would be high enough to prevent the flowers from being washed away.

Gary Hagg transported the stone blocks to the site, making numerous trips to pick them up at Home Depot. Joe and Sharon Sheffer along with Darlene Dorward and Pat Long labored tirelessly in the heat to construct the planter with Phillis. Darlene and Pat, members of the Club’s Horticulture Committee, came up with the design for the planter. David Trask provided the hanging plaque for the welcome sign.

The dedication concluded with home baked cookies and milk provided by Darlene Darward.