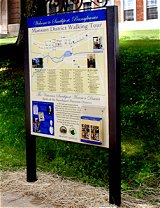 A new addition was added to the lawn of the McKean County Courthouse on Friday, July 10.

An attractive kiosk appeared, which will guide Smethport visitors on the Mansion District Tour route in Smethport.

The kiosk contains route information of the properties listed on the tour along with the original builders of the property, many constructed over a century ago.

The kiosk also contains some interesting facts from Smethport’s most notable entrepreneurs.

The kiosk was the cumulative result of work by the Allegheny National Forest Vacation Bureau and the Smethport Heritage Counsel’s Mansion Tour Committee.