Ross and Jovanna Porter, owners and innkeepers of the Mansion District Inn B&B in Smethport, Pennsylvania are pleased to announce that their carefully restored Victorian era inn has earned TripAdvisor’s 2015 Travelers’ Choice® award as one of the Top 25 Best Bed and Breakfasts in the United States.

The B&B placed Number 1 in Pennsylvania and Number 7 nationwide.

TripAdvisor is the world’s largest travel website, with more than 200 million reviews and opinions by travelers around the world.  Now in its 13th year, TripAdvisor Travelers’ Choice awards honor the world’s best hotels, earning their reputations from those who know them best – real travelers.  This year’s Travelers’ Choice Awards are based on reviews and opinions collected in 2014 from among more than 890,000 reviewed hotels, B&Bs and specialty lodgings on TripAdvisor sites worldwide. 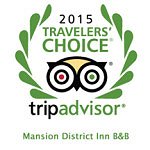 “We are very excited to have received this recognition from TripAdvisor,” said Jovanna Porter.  “We thank all of our guests who have recommended our bed and breakfast, and who took the time to share their positive experiences at the Mansion District Inn.  Of course, this distinction would not have been possible without the exceptional efforts of our dedicated service team.”

“TripAdvisor’s community of millions of travelers has helped us highlight some of the very best hotels from around the world,” said Barbara Messing, chief marketing officer for TripAdvisor. “The Travelers’ Choice list of award-winning properties is perfect to inspire travelers as they think about their 2015 travel plans.”

The complete 2015 Travelers’ Choice list is available at:
www.tripadvisor.com/TravelersChoice-Hotels-cInnsBB

This six-suite boutique inn, once the home of Reverend John Heber McCandless and his wife Emma Hamlin McCandless, daughter of banker/businessman Henry Hamlin, was constructed in 1891. Henry Hamlin was reported to be the wealthiest private banker in the United States in 1892. The home remained within the Hamlin family until 1992 and was purchased by the Porters in 1995.

The mansion, which is an exceptional example of Queen Anne building style, is appointed with a collection of antiques and artwork mirroring its original grandeur. The golden oak dining room boasts a portrait gallery of historic family members dating from 1826. The inn features some of the finest architectural details and interior craftsmanship of the Oil Baron era. Unexpected nooks and crannies make this B&B a unique alternative to conventional hotels.