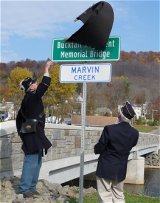 After more than a year of planning, Marvin Street Bridge in Smethport was officially named as “Bucktail Regiment Memorial Bridge” during a ribbon-cutting ceremony on Saturday.

Signs are now placed at both ends of the bridge to honor the area’s Civil War volunteers recruited by Thomas Lieper Kane in 1861. The Bucktails served with “high distinction” in 18 major battles in a war that ultimately took over 750,000 lives.

Today we are here to not only celebrate the construction of a new and important bridge in Smethport but to also celebrate an important piece of Smethport’s rich cultural Heritage.

A community is the sum total of its citizens and its history. What happened here in the past helps create the fiber and structure of our community today. And we can’t really understand who we are as a Borough without understanding the fibers that make up the entire cloth. Smethport has an extremely rich historical tapestry with many colorful individuals and events woven into it. It’s important that we understand and celebrate our dynamic past so we understand who we are as a community. Roots do matter.

I’d like to acknowledge some of the events that led to the construction of this unique bridge.

One of the pieces of the masterplan was Smethport entry gateways. Originally the gateways were to be the Borough limits. By 2010 it was decided to utilize and develop the two waterways as gateways: to the east Potato Creek and to the west Marvin Creek. The goal was to make the entry into Smethport an announcement and an experience.

I want to acknowledge and commend Smethport’s Borough Council and especially Smethport Council President Greg Rounsville. Greg and the Borough Council embraced the concept of developing our bridge gateways and Greg, along with the Smethport Borough Council, helped facilitate key aspects of the project.

Linda Devlin of the Allegheny National Forest Visitors Bureau also needs to be commended. In 2011 Linda contacted the Borough that a design grant opportunity was available through DCNR PA WILDS. We applied for and were awarded the matching grant. This was a modest grant, not a huge grant, but it provided the seed money to move the gateway project forward.

Another key person in the development of the Gateway project is Smethport native son, engineer Curt Wallace, owner and chief engineer of Wallace Engineering in Bradford. Curt assisted with the engineering development of our gateway plan. Part of that plan would be the installation of historic lighting at the east and west bridge gateway entries. Smethport is fortunate to have its own electric company and dedicated Smethport Borough employees, Charles Jones and Bill Gallup, to do the infrastructure and install of the bridge gateway lighting. Part of the in-kind portion of the grant funds was provided for by the talents of Charlie Jones and Bill Gallup.

It was during Curt Wallaces’s involvement with the Gateway entry project that we became aware that the Commonwealth was going to build a new Route 6 bridge across Marvin Creek. Curt and I discussed this and Curt contacted PennDot engineer and Smethport native Tom Zurat about the bridge design construction. We wanted the bridge to be special. The Hickory Street Bridge in Warren was discussed and would serve as a model.

Through Tom Zurat we were directed to PennDot District 2 Executive Engineer Kevin Kline and then to bridge project design engineer Robert Jaconski. Robert would be our key contact for bridge design look and feel. It was decided to have concrete work stamped and stained to resemble Smethport native limestone construction and that gateway lighting would be incorporated into the design. By spring of 2012 the design of the bridge was set.

We met with the PennDot engineer Jaconski during the summer of 2012 to see the final drawings and we learned to our dismay that because of expense and winter maintenance, separate pedestrian walkways were not to be included. This was a important part of our plan that proved to be off the table. Although there are provisions for walkways on the new bridge a separate pedestrian walkway still needs to be addressed.

Having a pedestrian walkway that encircles Hamlin Lake has been an important part of our Heritage plan since inception.

In conclusion, bridges, like the Bucktails become part of our local heritage. The first bridges here were of log/ corduroy construction. In 1891 the Borough financed the construction of the first iron bridge at Marvin Street. During the New Deal era of the 1930s a concrete bridge replaced the 1891 iron bridge. And now, today, thanks to the Commonwealth and the Borough, we celebrate Smethport’s unique US Civil War Bucktail Heritage and celebrate the completion of this new and special bridge.