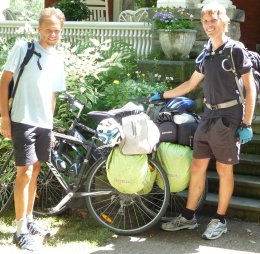 French students stopped in for some refreshments and conversation Saturday at the Bouton House. They were cruising Route 6 in Smethport as a leg in their two-month bicycle journey from Seattle to New York City.

Florent Grenez from Cambrai in northern France and Romain Tuffery from Vernon in the Upper Normandy region, are in their second year of general engineering studies at ICAM, a private school with eight campus locations throughout France.

Florent and Romain said they were taking the trip to discover America and its culture and enjoy the landscape. They also wanted to visit and speak with as many people as possible.

The two cyclists try to peddle 50 to 60 miles a day. They camp out in parks most of the time, but occasionally ask if they can stay in a homeowner’s yard. So far, they have had only good experiences with the people they have met.

As part of a volunteer program they are participating in, both intend to help out at homeless shelters when they reach New York City. Romain will work in Brooklyn and Florent in the Bronx.

When their two-month stay in this country ends, they will head back to France and resume their studies.