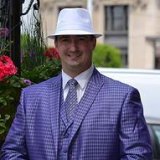 ​The “Greatest Show On Dirt” will be at the Bradford Speedway again in 2013!

In preparation for the season opening, the track’s natural clay surface was recently re-graded. As any dirt track fan can attest, track preparation is an art form that requires the use of specialized heavy earth-moving equipment.​

During the Bradford Speedway’s heyday in the 1980s and 1990s, racers were able to run two-deep and even three-deep through the turns. But, over time, some of the clay was pushed to the outside walls. Additionally, some of the clay from the corners ended up pushed into the infield of the track. This created a flat “apron” at the bottom of the corners and then very steep banking to the outside wall. The result was “single-lane” racing; in other words, only one car at a time could go through the corners.

So last fall, Steve Andrulonis, owner of S Andrulonis Trucking and Excavating of Troy, Pennsylvania, and his crew spent several days re-grading the track back to its original contours as they existed during the 1980s and 1990s. The clay against the outside walls and on the infield was brought to the apron and then the corners were re-graded. This re-grading will allow two-wide and even three-wide racing this season on the natural clay surface of the Bradford Speedway.

​Thanks to the re-grading, the corners at the Bradford Speedway are not only wide, they’re also now at a very-favorable banking of 16 degrees. This banking compares to the following banking at some well-known NASCAR tracks:

The Bradford Speedway traces its history back to 1954 and hosted a 1958 NASCAR Grand National Series event which was won by current NASCAR Team Owner Junior Johnson. The Bradford Speedway is located at 330 Summit Road, just north of Rew, Pennsylvania and near Bradford, PA, and Olean, NY.