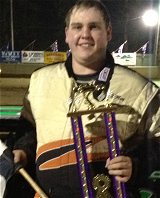 The 2012 racing season came to a close at the “New” Bradford Speedway Thursday night as Jeff and Christy Andrulonis of Smethport crowned the first four champions under their inaugural year of track ownership. All championship trophies for race and track were sponsored by Smethport Web Services operated by Linda and Nathan Muller.

Jeff Andrulonis is already looking ahead to the 2013 season. “With the unbelievable year we’ve had, we’re looking forward to more capital improvements for next year. We’re tentatively looking at starting the next season on the first Friday in May (May 3) and potentially adding a weekly ’emod’ show to our existing classes.”

Congratulations go to Smethport’s Garrett Mott, a mechanic at Lakeside Tire & Auto, one of three drivers who had a shot at the Budweiser Crate Late Model Championship. He paced the field in the final five laps to win the race, only the second of his career. The win also allowed him to collect his first ever track championship.